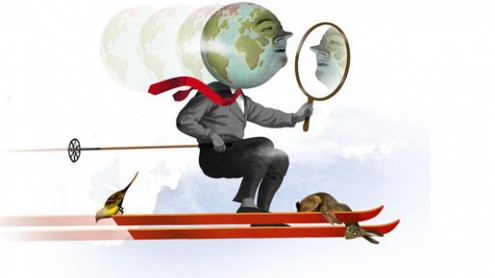 The phrase ”humble leadership” is not an oxymoron. While many people immediately conjure-up an image of the ever so confident, bombastic extrovert without an ounce of humility as the picture of what constitutes a real leader, nothing could be further from the truth.

THE two most popular words in the business lexicon are probably “global” and “leadership”. Put them together and people in suits start to salivate. That is perhaps why more than 1,000 corporate bosses are flocking to Davos, a Swiss ski resort, this week. There, at the annual bash of the World Economic Forum (WEF), they sip vin des glaciers with some 50 heads of state and 300 cabinet ministers. Whatever the topic, from deficits to deadly diseases, the talk is all of providing “global leadership”. And not just in the short term: the WEF rigorously selects and nurtures “Young Global Leaders” to form a “next-generation leadership community that is mission-led and principle-driven”.

The rise of the rootless

The cult of the global leader is spreading. Business schools are full of it. INSEAD calls itself “the business school for the world” and has campuses in Singapore and Abu Dhabi as well as Fontainebleau. Fuqua School of Business at Duke University boasts that it is “the world’s first legitimately global business school”; it has campuses in six countries. Big firms no longer aspire merely to train competent managers. They pride themselves on their ability to select and train leaders for global roles.[pullquote]If leadership has a secret sauce, it may well be humility. A humble boss understands that there are things he doesn’t know. He listens: not only to the other bigwigs in Davos, but also to the kind of people who don’t get invited, such as his customers.[/pullquote]

This is not all guff. Many industries are globalising fast, creating waves of disruption. Parochial companies may perish. Global ones complain that a shortage of global talent impedes their growth, especially in emerging markets. Yet they rapidly burn through what global talent they have: by one estimate, nearly 80% of CEOs of S&P 500 firms are ousted before retirement.

So there is clearly a need for global leadership. But when the public look at what is on offer, they are not impressed. Many of the bankers and politicians caught dozing by the financial crisis were regulars at Davos. Ordinary folk trust Davos Man no more than they would a lobbyist for the Worldwide Federation of Weasels. A survey by Edelman, a public-relations firm, finds that only 18% of people trust business leaders to tell the truth. For political leaders, the figure is 13%.

What can be done? Much of the answer lies in giving the little guys better tools to keep Davos Man in check: stricter accountability for government leaders, sounder regulations to curb corporate abuses. But there is also a case for reforming the global-leadership industry. The people who run it need to think hard about what they mean by both globalisation and leadership.

People whose jobs require constant whizzing through airports often overestimate the extent of globalisation. Most other folk live in the same country all their lives. Most trade occurs within national borders. Nearly all politics is local. Company bosses who fail to notice this may underestimate political risks or ignore cultural differences, and such errors may prove disastrous. The best global leaders need to immerse themselves in local cultures.

Leadership has always been a slippery concept, and is getting slipperier by the day. In the West, as deference collapses and knowledge workers rise, companies have flattened their management hierarchies. But many non-Western companies continue to believe in hierarchy. In India and China, leaders are often lofty figures and companies have lots of rungs to be climbed. And disruptive innovation can put a premium on command-and-control. Apple thrived as a dictatorship under Steve Jobs; Nokia’s consensus-seeking leaders let the firm crumble.

Global-leadership gurus also need to think more carefully about the relationship between business and the wider world. It sounds noble to promise, as practically every boss in Davos does, that your company will solve all manner of problems unrelated to its core business. For companies in emerging markets, this may make sense: if they do not build a road to their mine in a remote area, no one else will. In rich countries, however, governments leave fewer gaps that so obviously need filling. Talk of social responsibility needs to be realistic: it is more dangerous to promise too much than too little.

There are signs that the global-leadership industry is trying to shape up. Harvard Business School obliges its students to spend time in other countries. Companies increasingly expect their high-flyers to spend time running far-flung subsidiaries. Henkel, a German chemical-maker, insists that executives live in at least two different countries before being considered for promotion. Nestlé, a Swiss food company, boasts executive board members from eight different countries. The WEF urges charities to learn from businesses and vice versa.

Management gurus are producing new measuring devices: the Global Leadership and Organisational Behaviour Effectiveness (GLOBE) project has surveyed more than 17,000 managers in 62 countries to identify cultural differences that leaders ought to know about. Americans are unusually assertive, apparently, and Brazilians surprisingly unconcerned about the future. There are many project managements tools that can help monitor the tasks and also have a clear view as to how much progress has happened in work. Learn more about basecamp alternative software for free, if you are looking for a modern project management solution.

World leaders with wings of wax

But there is still a flaw with the very notion of global leadership. Abraham Lincoln observed that “nearly all men can stand adversity but if you want to test a man’s character, give him power.” Similar temptations afflict those who are given the title of “young global leader”. Clever businesspeople have a tendency to be arrogant at the best of the times; telling them that they are masters of the universe can only magnify it. Arrogance breeds mistakes: look at all the empire-building bosses who attempt ambitious mergers despite ample evidence that such mergers usually fail.