Bhagavad Gita and Management I 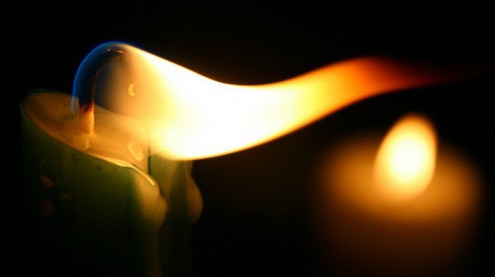 "Mind is very restless, forceful and strong, O Krishna, it is more difficult to control the mind than to control the wind." --- Arjuna to Sri Krishna

Management has become a part and parcel of everyday life, be it at home, in the office or factory and in Government. In all organizations, where a group of human beings assemble for a common purpose, management principles come into play through the management of resources, finance and planning, priorities, policies and practice. Management is a systematic way of carrying out activities in any field of human effort. Its task is to make people capable of joint performance, to make their weaknesses irrelevant, says the Management Guru Peter Drucker . It creates harmony in working together – equilibrium in thoughts and actions, goals and achievements, plans and performance, products and markets. It resolves situations of scarcity, be they in the physical, technical or human fields, through maximum utilization with the minimum available processes to achieve the goal. Lack of management causes disorder, confusion, wastage, delay, destruction and even depression. Managing men, money and materials in the best possible way, according to circumstances and environment, is the most important and essential factor for a successful management.

The Gita further explains the theory of “detachment” from the extrinsic rewards of work in saying: · If the result of sincere effort is a success, the entire credit should not be appropriated by the doer alone. · If the result of sincere effort is a failure, then too the entire blame does not accrue to the doer. The former attitude mollifies arrogance and conceit while the latter prevents excessive despondency, de-motivation and self-pity. Thus both these dispositions safeguard the doer against psychological vulnerability, the cause of the modem managers’ companions of diabetes, high blood pressure and ulcers. Assimilation of the ideas of the Gita leads us to the wider spectrum of ” lokasamgraha ” (general welfare) but there is also another dimension to the work ethic – if the ” karmayoga ” (service) is blended with ” bhaktiyoga ” (devotion), then the work itself becomes worship, a “sevayoga” (service for its own sake.) Along with bhakti yoga as a means of liberation, the Gita espouses the doctrine of nishkamya karma or pure action untainted by hankering after the fruits resulting from that action. Modern scientists have now understood the intuitive wisdom of that action in a new light.

Scientists at the US National Institute of Mental Health in Bethesda, found that laboratory monkeys that started out as procrastinators, became efficient workers after they received brain injections that suppressed a gene linked to their ability to anticipate a reward.The scientists reported that the work ethic of rhesus macaques wasn’t all that different from that of many people: “If the reward is not immediate, you procrastinate”, Dr Richmond told LA Times. (This may sound a peculiarly religious idea but it has a wider application. It could be taken to mean doing something because it is worthwhile, to serve others, to make the world a better place – ed.)

Sound mental health is the very goal of any human activity – more so management. Sound mental health is that state of mind which can maintain a calm, positive poise, or regain it when unsettled, in the midst of all the external vagaries of work life and social existence. Internal constancy and peace are the pre-requisites for a healthy stress-free mind. Some of the impediments to sound mental health are: · Greed – for power, position, prestige and money. · Envy – regarding others’ achievements, success, rewards. · Egotism – about one’s own accomplishments. · Suspicion, anger and frustration. · Anguish through comparisons. The driving forces in today’s businesses are speed and competition. There is a distinct danger that these forces cause erosion of the moral fibre, that in seeking the end, one permits oneself immoral means – tax evasion, illegitimate financial holdings, being “economical with the truth”, deliberate oversight in the audit, too-clever financial reporting and so on. This phenomenon may be called as “yayati syndrome”. In the book, the Mahabharata , we come across a king by the name of Yayati who, in order to revel in the endless enjoyment of flesh exchanged his old age with the youth of his obliging youngest son for a thousand years. However, he found the pursuit of sensual enjoyments ultimately unsatisfying and came back to his son pleading him to take back his youth. This “yayati syndrome” shows the conflict between externally directed acquisitions (extrinsic motivation) and inner value and conscience (intrinsic motivation.)

Management guidelines from the Bhagavad Gita

There is an important distinction between effectiveness and efficiency in managing. · Effectiveness is doing the right things. · Efficiency is doing things right. The general principles of effective management can be applied in every field, the differences being more in application than in principle. The Manager’s functions can be summed up as: · Forming a vision · Planning the strategy to realise the vision. · Cultivating the art of leadership . · Establishing institutional excellence . · Building an innovative organisation. · Developing human resources . · Building teams and teamwork. · Delegation , motivation , and communication . · Reviewing performance and taking corrective steps when called for. Thus, management is a process of aligning people and getting them committed to work for a common goal to the maximum social benefit – in search of excellence. The critical question in all managers’ minds is how to be effective in their job. The answer to this fundamental question is found in the Bhagavad Gita , which repeatedly proclaims that “you must try to manage yourself.” The reason is that unless a manager reaches a level of excellence and effectiveness, he or she will be merely a face in the crowd. 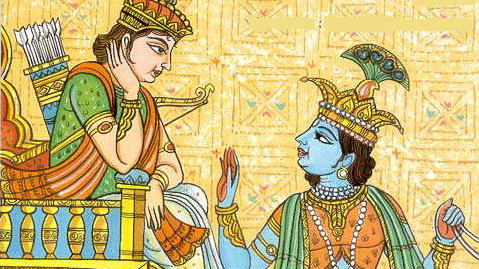 Old truths in a new context

The Bhagavad Gita , written thousands of years ago, enlightens us on all managerial techniques leading us towards a harmonious and blissful state of affairs in place of the conflict, tensions, poor productivity, absence of motivation and so on, common in most of Indian enterprises today – and probably in enterprises in many other countries. The modern (Western) management concepts of vision, leadership, motivation, excellence in work, achieving goals, giving work meaning, decision making and planning, are all discussed in theBhagavad Gita . There is one major difference. While Western management thought too often deals with problems at material, external and peripheral levels, the Bhagavad Gita tackles the issues from the grass roots level of human thinking. Once the basic thinking of man is improved, it will automatically enhance the quality of his actions and their results. The management philosophy emanating from the West, is based on the lure of materialism and on a perennial thirst for profit , irrespective of the quality of the means adopted to achieve that goal. This phenomenon has its source in the abundant wealth of the West and so ‘management by materialism’ has caught the fancy of all the countries the world over, India being no exception to this trend. My country, India, has been in the forefront in importing these ideas mainly because of its centuries old indoctrination by colonial rulers, which has inculcated in us a feeling that anything Western is good and anything Indian is inferior. The result is that, while huge funds have been invested in building temples of modem management education, no perceptible changes are visible in the improvement of the general quality of life – although the standards of living of a few has gone up. The same old struggles in almost all sectors of the economy, criminalisation of institutions, social violence, exploitation and other vices are seen deep in the body politic.

The source of the problem

The reasons for this sorry state of affairs are not far to seek. The Western idea of management centres on making the worker (and the manager) more efficient and more productive. Companies offer workers more to work more , produce more, sell more and to stick to the organisation without looking for alternatives. The sole aim of extracting better and more work from the worker is to improve the bottom-line of the enterprise. The worker has become a hireable commodity, which can be used, replaced and discarded at will. Thus, workers have been reduced to the state of a mercantile product . In such a state, it should come as no surprise to us that workers start using strikes ( gheraos ) sit-ins, ( dharnas ) go-slows, work-to-rule etc. to get maximum benefit for themselves from the organisations. Society-at-large is damaged. Thus we reach a situation in which management and workers become separate and contradictory entities with conflicting interests. There is no common goal or understanding. This, predictably, leads to suspicion, friction, disillusion and mistrust, with managers and workers at cross purposes. The absence of human values and erosion of human touch in the organisational structure has resulted in a crisis of confidence. Western management philosophy may have created prosperity – for some people some of the time at least – but it has failed in the aim of ensuring betterment of individual life and social welfare. It has remained by and large a soulless edifice and an oasis of plenty for a few in the midst of poor quality of life for many. Hence, there is an urgent need to re-examine prevailing management disciplines – their objectives, scope and content. Management should be redefined to underline the development of the worker as a person, as a human being, and not as a mere wage-earner. With this changed perspective, management can become an instrument in the process of social, and indeed national, development. Now let us re-examine some of the modern management concepts in the light of the Bhagavad Gita which is a primer of management-by-values.

The first lesson of management science is to choose wisely and utilise scarce resources optimally. During the curtain raiser before the Mahabharata War, Duryodhana chose Sri Krishna’s large army for his help while Arjuna selected Sri Krishna’s wisdom for his support. This episode gives us a clue as to the nature of the effective manager – the former chose numbers, the latter, wisdom.

A popular verse of the Gita advises “detachment” from the fruits or results of actions performed in the course of one’s duty. Being dedicated work has to mean “working for the sake of work, generating excellence for its own sake.” If we are always calculating the date of promotion or the rate of commission before putting in our efforts, then such work is not detached. It is not “generating excellence for its own sake” but working only for the extrinsic reward that may (or may not) result . Working only with an eye to the anticipated benefits, means that the quality of performance of the current job or duty suffers – through mental agitation of anxiety for the future. In fact, the way the world works means that events do not always respond positively to our calculations and hence expected fruits may not always be forthcoming. So, the Gita tells us not to mortgage present commitment to an uncertain future. Some people might argue that not seeking the business result of work and actions, makes one unaccountable. In fact, the Bhagavad Gita is full of advice on the theory of cause and effect, making the doer responsible for the consequences of his deeds. While advising detachment from the avarice of selfish gains in discharging one’s accepted duty, the Gita does not absolve anybody of the consequences arising from discharge of his or her responsibilities. Thus the best means of effective performance management is the work itself . Attaining this state of mind (called ” nishkama karma “) is the right attitude to work because it prevents the ego , the mind, from dissipation of attention through speculation on future gains or losses.

Second part of the article is coming soon.

Article  by M.P. Bhattathiri, Retired Chief  Technical Examiner ,  to The Govt. of Kerala.