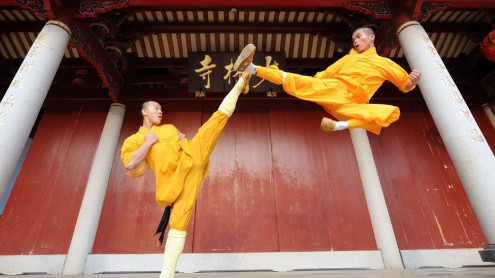 Once there was a young American martial arts student, who became fascinated by the discipline of Shaolin.  Shaolin temples are famous for the methods of teaching martial arts and it made it more intriguing because of its secrecy.  It was no surprise that he found himself in China, the home of ancient warriors. He arrived at the temple but there was no one to be found except an old sweeper engaged in cleaning the temple courtyard.  He tried to engage the old man in conversation, irreverently demanding to know the whereabouts of the temple authorities.  He was met with a blank stare from the old man. The impatience of the young man grew to exasperation. It seemed that no one would be able to understand him.
After some time he happened to meet some monks. He excitedly tried to communicate that he wanted to join them to learn their ways.  He was dejected when informed that as well as not being able to join them he also had to leave the temple immediately. He decided to stay because he was determined to learn the techniques of Shaolin.  He made his residence on a small stone pillar outside the temple compound. This was to be his home for many months, braving the elements. Every day he would see the sweeper entering the temple grounds. One day to his astonishment the old sweeper stopped and conversed with him in English.  The old man was moved be the young westerner’s sincerity.  He wanted to acknowledge the youngster’s austerity, and as suddenly as he stopped he moved on and went about his work.
Later the same morning the temple gates where opened, two monks came out to escort the young man into the temple.  He was brought before the Head priest of the temple.  The young man was shocked to discover that the Head priest was the very same humble sweeper. The young American was very grateful to be permitted to join the other monks and could understand this privilege was because of his willingness to confront his pride.