MORE THAN MONEY: Questions Every MBA Needs to Answer

What are you going to do with your lucky lottery ticket? That’s a  question every MBA faces. A lot of time and money has been invested in  you, and once you graduate you’re supposed to cash that ticket in for as  much money and status as you can. Your parents and peers expect it. And  you may feel that there’s really no other choice. You can’t risk  wasting that expensive education. It’s the safe thing to do. Isn’t it?

Not  necessarily. Mark Albion doesn’t pretend to have all the answers, but  his unique perspective can help you find yours. There are other ways to  look at potential risks and rewards, even when you have thousands of  dollars of student loans to pay back. Money is important but it’s not  the key to fulfillment. The “safe” choice, the most monetarily rewarding  one, can carry enormous psychological and spiritual pain. As Ralph  Waldo Emerson put it, “Sometimes money costs too much.” [pullquote]“Sometimes money costs too much. – Ralph  Waldo Emerson”[/pullquote]

In More  Than Money, Albion redefines the typical way the risk/reward equation is  written, using his own life story and those of the many entrepreneurs,  executives and MBAs he’s met as both cautionary and inspirational tales.  He introduces a framework of four crucial questions to consider when  thinking about your career choices, as well as “lifelines,” principles  that can help you answer these questions and guide you to construct your  personal, strategic destiny plan.

A consciousness-raising book  as well as a career guide, More Than Money encourages MBA students to  give themselves permission to be who they really want to be and find  their path of service. For, as Albion says, in the end “we won’t  remember you for the size of your wallet as much as the size of your  heart.”? 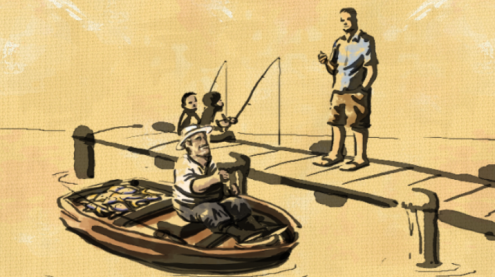 "The Good Life" takes you to a chance meeting between an MBA and a fisherman on a small island. As the MBA tries to teach the fisherman about business, the fisherman teaches him about life.

About the author: Mark Albion spent 18 years as a student and professor at Harvard University and its Business School. A seven-time social entrepreneur, he left Harvard to develop a community of service-minded MBAs, co-founding Net Impact in 1993. He is the author of the New York Times bestseller Making a Life, Making a Living (2000), CD-Series Finding Work That Matters (2002), True to Yourself: Leading a Values-Based Business (2006), all at www.makingalife.com, and More Than Money: Questions Every MBA Needs to Answer (2009), at www.more-than-money.org, along with the animated movie, “The Good Life: An MBA Meets a Fisherman.” Profiled on 60 Minutes, his work praised by leaders as diverse as Ronald Reagan and Mother Teresa, Dr. Albion has spoken at more than 125 business schools on five continents, for which Business Week magazine dubbed him “the savior of B-school souls.” Known to his two daughters and silver-anniversary wife as the man who rode across Afghanistan on horseback, Mark’s 2008 video interview in Ukraine explains his philosophy.