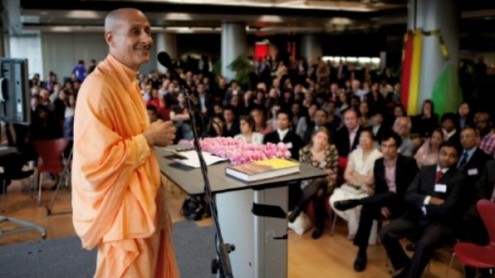 Radhanath Swami speaks on spirituality at HSBC London during Book signing event of his Autobiography - The Journey Home.

The 10 th lunar night of Dashera shone brilliantly over the heart of Europe’s financial district where 1000 bankers gathered to embark on their spiritual journey home. Known as the ‘removal of ill fate,’ Dashera marks the victory of righteousness finally achieved by Lord Rama through immense adversity. To celebrate the forthcoming festival of Dipavali, the journey home of Shri Rama, the Vedic Society at the Global Headquarters of HSBC invited His Holiness Radhanath Swami as keynote speaker to share this eventful episode of history to the world through its landmark 600ft skyscraper in Canary Wharf, London.

While bankers assembled in the event hall to live strings of the sitar and refreshments, His Holiness was hosted for an intimate gathering by the Global Board Manager and esteemed Group Chief Officer to meet with dozens of divisional heads and externally invited guests. To name a few, invited guests included senior executives from the UK Home Office, other investment banks, actors, celebrities, surgeons, entrepreneurs and lawyers. Each met with His Holiness as the honorary chief guest enquiring on various matters both personal and on business.

Entering into the 1000 strong assembly of bankers, VIPs and executives took to their seats for the grand opening. Having welcomed the congregation, the chair of the Vedic Society as MC described the purpose of the event and introduced the topic ‘Embracing Challenges’ as the theme for the evening. While scholars and readers have extracted many important messages from the Ramayana text, Lord Rama repeatedly illustrated His attitude to embrace every challenge that life brings as an opportunity to advance onwards in our paths. Composed in 24,000 poetical verses, the Ramayana literally documents the ‘Journey of Rama’ to exemplify ideal character and virtues through the history of Rama’s journey for global peace and prosperity – all in the face of challenges.

His Holiness summarised how Rama’s primary focus was to deal with every situation morally and with integrity. Trials, tribulation and pain give birth to the greatest of opportunities. Through a mother’s pain of labour children are birthed. Despite witnessing 2000 years of history, Redwood trees in California stand strong through stable roots. His Holiness described religious revelations manifesting through trials commenting in particular how in the Jewish tradition the sacrifices of the sons of Abraham gave rise to the Ten Commandments. Through the crucifixion, the resurrection of Christ gives hope to his followers.

HSBC Bank is one of the four major clearing banks in the United Kingdom and is a wholly owned subsidiary of HSBC Holdings. The business ranges from the traditional High Street roles of personal finance and commercial banking, to private banking, consumer finance as well as corporate and investment banking. Across all brands the bank operates some 1800 sites in the UK.